Impact of the NLRB on Professional Sports

The NLRB ventured into the labor relations arena of professional sports in a case involving major league baseball umpires. Since then the agency has played a prominent role in a number of cases involving sports that have gripped the nation's attention. The Board was widely credited with bringing an end to the 1995 baseball strike by securing an injunction under Section 10(j) of the Act requiring the baseball club owners to withdraw their unilaterally imposed changes to the negotiated system of setting wages in baseball. Supreme Court Justice Sonia Sotomayor, then a U.S. District Court Judge for the Southern District of New York, issued the injunction. 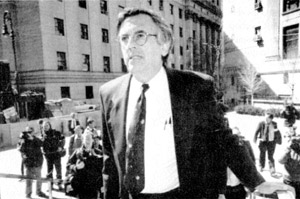 In professional football, the NLRB secured a $30 million back pay settlement in 1994, arising from the players' strike in 1987. The central charge by the National Football League Players Association was that the teams had unlawfully refused to allow the 1,300 returning striking players to participate in the games immediately following the end of the strike.

Photo: Then Regional Director Daniel Silverman walks up the steps of the federal district court in New York to present the NLRB's argument to enjoin the 1995 baseball strike.