In 1974, the National Labor Relations Act was amended to extend coverage and protection to 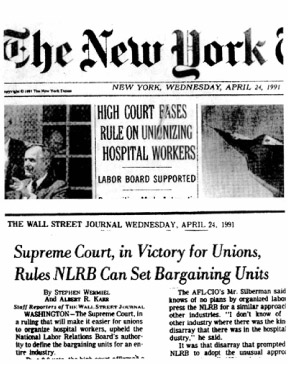 employees of non-profit hospitals. Nonprofit hospital workers were covered by the original Wagner Act in 1935, but were excluded in 1947 with the Taft-Hartley amendments. When the new legislation was considered by the Senate Committee on Labor and Public Welfare, it was recognized that labor relations in the health care industry required special considerations. The Senate Labor Committee sought to fashion a mechanism which would insure that the needs of the patient would be met during contingencies arising out of labor disputes. The new law represented a sound and equitable reconciliation of these competing interests.

For the first time in its history, on July 2, 1987, the Board announced its decision to engage in rulemaking on a major substantive issue by publishing in the Federal Register a "Notice of Proposed Rulemaking on Collective-Bargaining Units in the Health Care Industry." The Board's new rulemaking venture encompassed 14 days of hearings, in Washington, Chicago, and San Francisco. 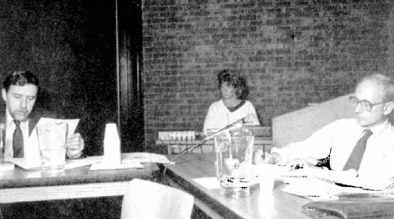 The Board heard from 144 witnesses and over 1800 commentators. The Board issued its health care Rule on April 21, 1989. After lengthy litigation, the Supreme Court finally approved the Board's Rule by unanimous vote on April 23, 1991. Since then, the long-disputed question of appropriate units in acute care hospitals has been largely put to rest.

Photos: The NLRB's Rulemaking success before the Supreme Court in 1991 was front-page news.; Representation Appeals Director Berton S. Subrin chaired the NLRB's hearings on the proposed health care rule. He is shown (at right) with Administrative Law Judge Bernard Ries at a hearing. A court reporter is in the background.