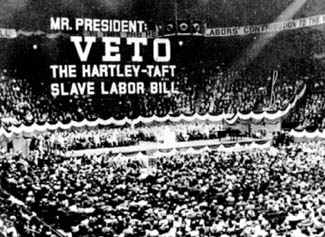 Under the Wagner Act, there were only employer unfair labor practices. In May 1947, after lengthy hearings, Taft introduced a complex bill that would make unions subject to the NLRB's unfair labor practice powers as well. After nine days of floor debate, the Taft bill passed by a vote of 68 to 24.

On the House side, Hartley introduced a bill in April that was even more restrictive from Labor's standpoint. It cleared the House by a vote of 308 to 107. A compromise measure approved by the House and Senate conferees easily passed in early June and was sent to the White House. In June, President Truman vetoed the bill, labeling it "dangerous," "unworkable," "harsh," "arbitrary," and "drastic." Within several days, Congress overrode the veto by a wide margin and the Labor Management Relations Act became law.

For 12 years, management groups had criticized the Board's seeming dual role as prosecutor and judge. In response, the Act created an independent NLRB general counsel to be appointed by the President, subject to Senate confirmation. The general counsel would act as a prosecutor separate from and independent of the Board and would supervise the agency's attorneys, except those on the staffs of individual Board members and the trial examiners. The Board would continue its judicial functions.

The Board was expanded from three to five members and authorized to sit in panels of three members to discharge its responsibilities. The Board's old review section, the group of lawyers who drafted the decisions for all the members, was abolished. Management groups had accused the section of having a pro-labor bias. Instead, the new law provided that each member would have a personal staff of attorneys to work on pending cases.

The Board was precluded from engaging in economic analysis under Taft-Hartley. In fact, the Board had abolished the Division of Economic Research in 1940.

Congress preserved the Wagner Act's national labor policy language encouraging collective bargaining, but added language that certain practices by unions that impair the free flow of commerce should be eliminated.