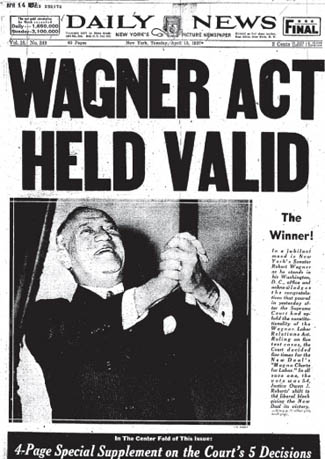 No sooner had the Wagner Act passed than employer groups mounted a campaign against it. The National Association of Manufacturers denounced the new law as unconstitutional, and, in September 1935, the American Liberty League issued a lengthy brief arguing against the constitutionality of the law and advising employers to disregard it.

Employers had ample cause for doubting the constitutionality of the Wagner Act. In the period from the Liberty League's brief to the 1936 presidential election, the Supreme Court declared unconstitutional much of President Franklin Roosevelt's innovative New Deal economic legislation. The federal courts issued nearly 100 injunctions against the operation of the Act, and the Board effectively was paralyzed until the Supreme Court ruled on the law's constitutionality.

In November 1936, Roosevelt was re-elected by a landslide, and several months later he unveiled his "court-packing plan," complaining of the Supreme Court's "nine old men" who had blocked his New Deal plans. In the pivotal 1937 Jones and Laughlin case, the Supreme Court saved the Act in a 5-to-4 decision upholding its constitutionality.

The Court sustained Congress's power to regulate employers whose operations affect interstate commerce, even though they were not directly engaged in commerce. The Court noted the effects of the 1919 steel strike as an example of how a labor dispute in manufacturing industries can impede the flow of goods in interstate commerce.